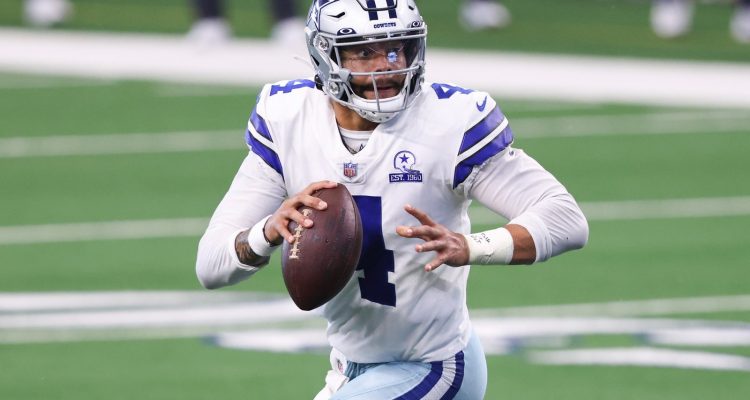 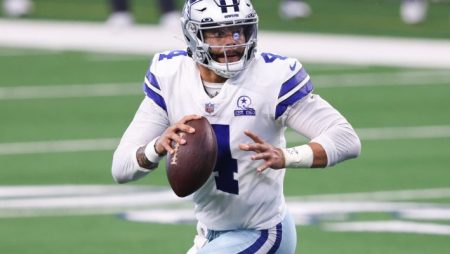 On Wednesday, July 28th, 2021 the Dallas Cowboys’ veteran starting quarterback, team captain, and unrefutably the leader of the Dallas Cowboys football team, Dak Prescott, was forced to exit practice early due to soreness in his right arm. Dak’s throwing arm is his right arm so this may be extremely concerning to all of those around the Dallas Cowboys’ training camp. Prescott has a long history of injuries, many of which he has played through even while in excruciating pain, while other injuries have been more serious, and they have sidelined Dak for extensive periods of time.

Back on Sunday, October 11th, 2020 the New York Giants faced off against their NFC East opponents in the Dallas Cowboys from AT&T Stadium located in Arlington, Texas. With 6 minutes and 33 seconds left in the third quarter of that match – up against the Giants, Prescott was tackled by the New York Giants defensive back Logan Ryan following a 9 – yard run by Dak. On that play Prescott suffered a catastrophic leg injury in which his right ankle endured a compound fracture as well as a dislocation as his foot was bent sideways. Prescott had to be carted off the gridiron in immense lower body pain as he was driven into the Dallas Cowboys’ locker room.

On that Sunday night last year, Dak was instantly rushed to a local hospital in order for medical professionals to address that gruesome injury. The Dallas Cowboys’ head team orthopedist Dan Cooper called in the well – respected foot and ankle specialist, Gene Curry, to perform the necessary operations. Dak underwent immediate surgery on his right ankle to clean out the wound and repair the fracture. The surgery performed by Curry was known to be a great success, but this injury resulted in Prescott having to miss the remainder of the 2020 – 2021 NFL season last year.

More about:  Sands China to debut first phase opening of The Londoner Macao on Feb 8

While playing NCAA college football at Mississippi State University for the Bulldogs, Prescott experienced the first injury of his football career that caused him to miss some game time. This was in the middle of his sophomore season as on November 9th, 2013 Dak sprained his elbow during the fourth quarter of a contest against the Texas A & M Aggies. Prescott’s elbow injury resulted in him missing the next two games for the Mississippi State Bulldogs. The first one against the Alabama Crimson Tide and the second was a match – up versus the Arkansas Razorbacks. That was Dak’s only major injury during his college football career.

Following that catastrophic injury that Dak suffered to his ankle last season against the New York Giants, the Dallas Cowboys still decided to reward his loyalty by signing the superstar quarterback to a 4 – year contract worth up to approximately $160 million on March 8th, 2021. That contract extension included a $66 million signing bonus as well as a total of $126 million in guaranteed money. Dak now averages a $40 million salary annually. This contractual agreement carries the following stipulations:

High Expectations for the Dallas Cowboys this Year

The Dallas Cowboys are entering the 2021 – 2022 season of the National Football League with extremely high expectations after the past couple of disappointing NFL seasons in which they missed the NFL playoffs. The Dallas Cowboys play in what the majority of people and analysts consider the weakest division of the National Football League in the NFC East.

Over the course of the last few years this struggling division has yielded NFL divisional winners / NFL playoff teams that have performed very poorly. In the case of last year’s 2020 – 2021 NFL season the Washington Football Team won the NFC East, and they hosted a playoff game after finishing the regular season with a losing record of 7 and 9. At the moment the Dallas Cowboys are the favorites to win the weak NFC East division of the National Football League.

The Dallas Cowboys will be relying on Prescott heavily to perform at a very high level and lead their franchise to a division title and the 2021 – 2022 NFL postseason. Luckily for Dak and the Dallas Cowboys his strained right shoulder is not that serious of an injury. Prescott should be good to go by week 1 and be capable of starting all 17 regular season games for the Dallas Cowboys this year, but only time will tell.

Throughout Prescott’s college football and NFL career he has accomplished various feats including being named the NFL Offensive Rookie of the Year in 2016, being selected to the NFL Pro Bowl twice in 2016 and 2018, making the PFWA All – Rookie Team in 2016, winning the Conerly Trophy two times in 2014 and 2015, as well as being selected to the All – SEC First Team on two accounts (2014, 2015).

Throughout Dak’s 5 – year career in the National Football League he has recorded a completion percentage of 66.0 % while throwing for 17,634 passing yards. Prescott has compiled 106 passing touchdowns while throwing 40 interceptions, and he has averaged an overall NFL passer rating of 97.3. Dak has also been a force in the Dallas Cowboys’ running game as he has rushed for 1,314 yards and 24 rushing touchdowns as well.

More about:  Overseas gamblers to be exempt from coming Japanese casino prize taxation

“I felt some soreness when making certain throws today, and I really just decided not to push things too far,” the Dallas Cowboys’ starting quarterback Dak Prescott expressed. “Better to be cautious and smart about it. I don’t see this as any kind of serious setback. We’ll treat it on a daily basis, and I’ll be fine.”

“It’s been fun to watch him. I said a lot in the spring, just having him out there, he’s been in this offense for what, five years now? Just being able to pick his brain about how he operates the offense has been great, and then getting to see him actually operate it on 11 – on – 11 stuff has been a lot of fun for me,” says the Dallas Cowboys’ back – up QB Garrett Gilbert. “That’s not even to mention his leadership is probably his best quality. Watching him on a day – to – day basis and the way he brings the energy, brings the juice every day has been great for me.”