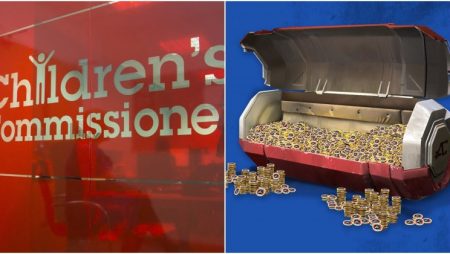 Nearly every country that has permitted gambling activities to take place within its borders has regulators to prevent the extremes habits of gambling. It’s a common global practice that minors and other vulnerable groups should never be exposed to aspects of gambling.

The worrying trend keeps creeping with several new inventions featuring at least an aspect of gambling. For example, the wide-spread use of loot boxes have almost always been met with equal criticism. The opponents of the technology argue that the practice introduces children to the gambling world, while a study claims that loot boxes are directly linked to gambling.

England’s commissioner for children Anne Longfield is the latest personality to voice her concern on the possible dangers that loot boxes may harbor. Longfield called for regulations similar to the ones in the gambling industry to protect children.

According to the Guardian, Longfield made a call for loot boxes to be classified under the same category as gambling. She said that such a measure would lower instances of children exhibiting early symptoms of gambling. The commissioner is equally worried about the amount of time that the gaming platform grants children.

Longfield has released a report, which shows that children are scared of the influence loot boxes may bring during their playtime. The report also inquired from children the amount of time that they dedicated to gaming activities. It didn’t end there, with the report also gathering children’s thoughts on loot boxes.

It emerged that children whose ages are between 10-11 consume 2-3 hours of video games daily. On the other hand, teens aged 15-16 were dedicating 1-3 hours to gaming activities.

Most children play FIFA, which is the main game in the older sets. Loot boxes were introduced to help children revamp their teams to improve the success rate. A 14-year old gamer who was interviewed confessed using loot boxes despite not understanding the technology.

Longfield couldn’t shy away from revealing the opinion of most children. The commissioner insisted that most of the children her team had interviewed had no knowledge about loot boxes. “It’s clear that some children are spending hundreds of pounds chasing their losses,” she added.

Apart from classifying loot boxes as gambling tools, Longfield recommended that the time should be defined. She argued that bringing restrictions on time is suitable for the parents as well as their offsprings.

Source article:
Children’s Commissioner in England Calls for Restrictions in Loot Box Use

Former HelloFresh Founding Member and VP of Operations & Product appointed as Skrmiish CEO
11 hours ago
Recent Comments
Categories
Recent Posts
18+
Gambling News from NewsCasinoNew.com is made for the most passionate fans of online casinos and internet gambling. We cover everything: from popular gambling world events and trends to new casino slot game releases and reviews, you will find the latest news stories.