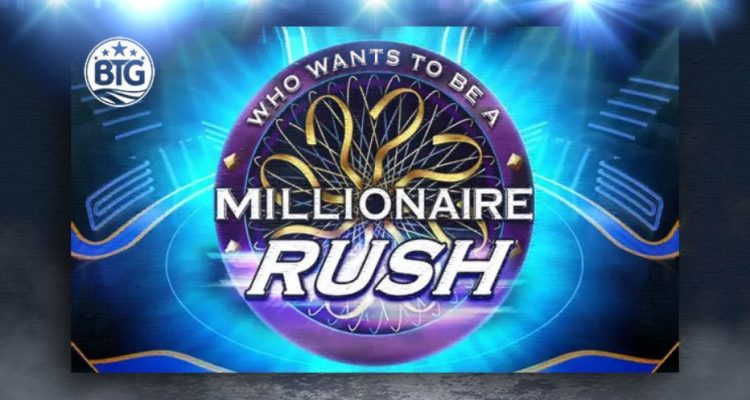 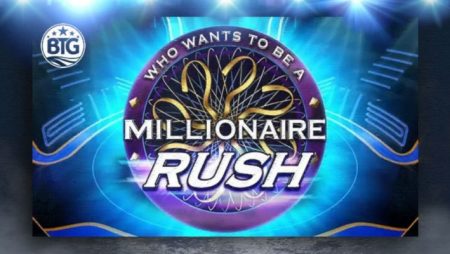 Big Time Gaming has just announced the release of a brand-new Who Wants to be a Millionaire style online slot game, featuring a new game mechanic. Millionaire Rush is a MegaClusters title that offers MegaTrail, a new mechanic that includes 12 levels of bonuses that are randomly put into play after each spin.

The slot sees the game symbols split and react, which can create up to 100 symbols on the reels. With the new MegaTrail component mixed in as well, players never know what will appear on the reels.

Load the game and you enter the studio of the popular television game show. The reels take center stage and include gems in bright colors along with wilds. Spin the game grid, watch as symbols form combinations, and trigger special features. Hear the classic game theme in the background that amps up as you play.

The slot includes the MegaClusters mechanic where winning icons split and react with each combination. The Big Time Gaming title starts with five rows and five columns with each win, an icon in the combination is replaced by four smaller symbols. Wins with the smaller symbols will then collapse and new icons fall into place. Reactions will continue until there are no new wins on the reels.

The new MegaTrail mechanic can be seen on the left-hand side of the online slot game grid. It flips each section with every spin. There are 12 rungs that are activated at random as you play. Rung 12 includes a bonus prize where players can win up to 1000x the bet! With Rung 7, players can activate six casino spins.

CEO of Big Time Gaming Nik Robinson commented on the new game by stating: “Millionaire Rush is a fast-paced reaction game that introduces MegaTrail. With each spin, the game produces a brand new MegaTrail where each rung bonus is unlocked with each reaction for some incredible big win action! Millionaire Rush has infinite combinations keeping players on the edge of their seats, especially in the Free Games where the ladder can be set up for maximum potential with up to 99 free spins.”

Big Time Gaming offers several Who Wants to Be a Millionaire games for slot fans, and the new Rush version now joins the portfolio list. The developer has taken the popular game show and gave it a boost with unique game mechanics like MegaClusters and the new MegaTrail.

One of the newer releases by the developer, Who Wants to Be a Millionaire Megapays, was released in late 2020 and was received by gamers. The slot has paid out several big prizes and it was in late 2021 when its first million-dollar prize was awarded.

The lucky player was enjoying the innovative title at Betfair Casino when the big prize was hit. The player wagered just €0.70 and managed to land a prize worth €1,036,049.64!