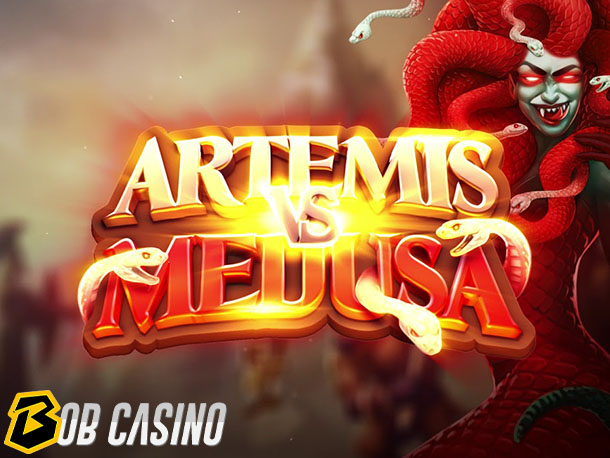 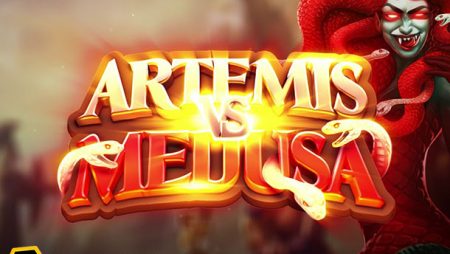 From a 2-man startup to a multi-million dollar software provider turning the heads of iGaming industry giants such as Playtech? Way to go, Quickspin!

As for their latest slot, they go for the tale of a conqueror some of us may be familiar with: Artemis. No, not the sharp-witted lad from Disney’s Artemis Fowl, but the good old goddess of the hunt, the moon, and chastity as she hunts down some of the most fierce creatures in Greek Mythology. As usual, we are just here to investigate what’s in it for the punters.

Can the goddess of the wilderness take down Medusa to win you the most coveted of bounties from the latest Quickspin Slot? Find out by playing Artemis VS. Medusa for real money here or enjoy a free demo below:

As with most Greek Mythology slots, the action takes place high up on the abode of the Greek Gods, Mount Olympus. Quickspin’s graphical artists, among them 2D artist Andrea Femerstrand, however, achieve one of the best results we have ever seen. They go for a cinematic look that might remind you of those grand scenes from the movie 300: Rise of an Empire, especially when you factor in the soundtrack. All up, it’s a good-look, which gives the slot props before you even delve into the gameplay.

The play area’s layout is something that will come out as familiar to a slots pundit, and amaze-balls to the beginner. There are five reels crisscrossed by a total of 1024 ways to win, which means two things. One, wins are triggered easily whenever identical symbols are lined up from the leftmost reel, regardless of the position, and two, winning big is all about winning on as many win ways as you can.

Both high rollers and casual players can hop in on the action on any device, selecting bets of 0.2 to one hundred units of the currency they are using. ROI is not disappointing, luckily, all thanks to decent stats of the math model driving the slot, starting with a 96.17% default RTP. The exact hit rate percentage is undisclosed as is usually the case with this developer, but mid volatility rating lets you know that the payouts will be coming in often right from the word go, at least.

Hitting the menu button reveals the values of the icons populating the grid on every spin: A bunch of card fillers, a quartet of brutes, including the serpent-headed enchantress, and Artemis. Helping cobble combinations together is an antler that acts wild to take the place of all the regular pays.

The Gorgo herself, the Minotaur, the griffon, and the harpy can appear with coin values of up to 15X on any base game spin. These are redeemed by Artemis’ golden frame symbol, which only appears on reel 5.

Artemis’ weapons-of-the-chase land as scatters on reels two, three, and four to activate a free spins bonus round, which only comes to an end when Medusa or Artemis is finally defeated.

The showdown happens on a much-elevated space, where Artemis and gorgon-and-company occupy opposite sides at the top of the grid. Determining how long the session will last is a symbol counter that records all appearances of each monster-type whenever the huntress’ symbol is present on the reels. Every single appearance of Artemis on the reels also clears one monster-type off the meter, while awarding the corresponding bounty.

In conclusion, monsters filling all spots on the meter spells defeat for Artemis. On the other hand, finally clearing Medusa’s bars on the meter means victory for Artemis, which needless to say, will award the biggest bounty.

Artemis VS. Medusa is a slot that had so much going for it during our test runs. A successful “battling on the reels” theme, bounties that come in often during the base game, extended bonus round sessions, and above all, a potent 1024 ways that had the potential to shell out life-changing wins of up to 5288 times the stake at any moment. A must-try for all serious punters out there! 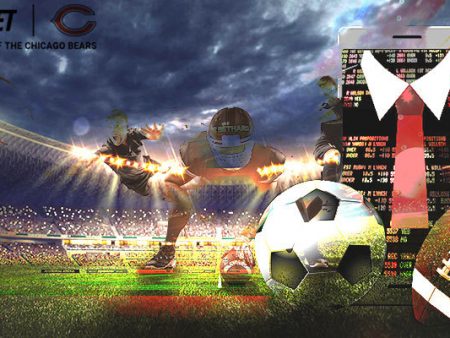 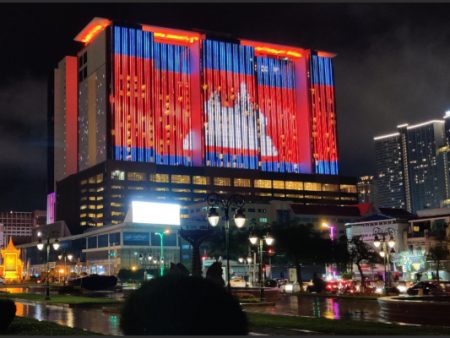 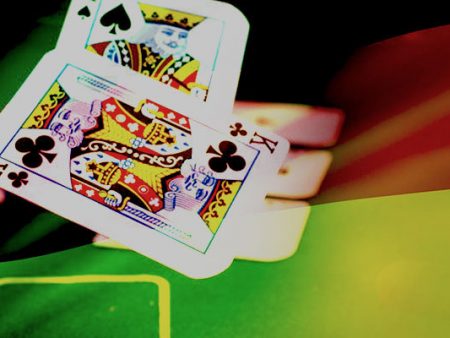 BtoBet Partners with Luckybet
6 hours ago

European Gaming Congress 2020 Speaker Profile: Marius Galdikas, Chief Executive Officer at ConnectPay
6 hours ago
Recent Comments
Categories
Recent Posts
18+
Gambling News from NewsCasinoNew.com is made for the most passionate fans of online casinos and internet gambling. We cover everything: from popular gambling world events and trends to new casino slot game releases and reviews, you will find the latest news stories.