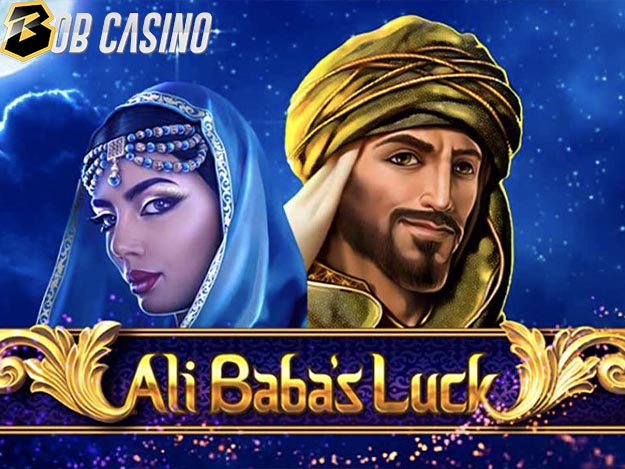 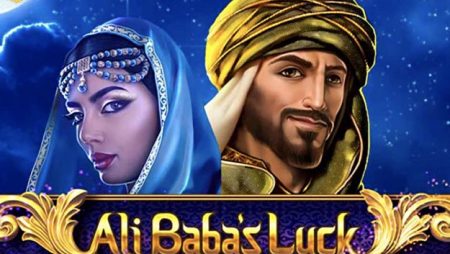 Ali Baba and the Forty Thieves is one of the most popular stories from the 1001 Nights alongside others such as The Seven Voyages of Sinbad and the Sailor, the Fisherman and the Jinni, and Aladdin’s Wonderful Lamp, to name but a few.  It was added by the first-known European Translator of the collection, Antoine Galland, in the 18th century and has since been the theme for a wide range of works in different domains, including the iGaming universe.

Ali Baba’s Luck by Red Tiger is the most recent slot to take on this story of a poor but hardworking woodcutter who “open sesames” his way to untold riches. This time, players will use the transformation and cloning powers of the featured symbols to bag decent wins that could exceed 5000 times their bet!

A slot where replicating gold symbols will be just as helpful as Ali Baba’s Faithful slave-girl, Morgiana. Play Ali Baba’s Luck here for real money or enjoy a free demo below:

The setting of the slot is quite simple. Long purple theatre drapes have been rolled aside to reveal 5 reels, each with 3 rows where a total of 10 paylines are utilized.

Symbols occupying the playing area have the distinct color shades utilized by the skin for this type of slots as a clam anticipative Arabian track tintinnabulates in the background to weave the Middle Eastern setting together. Just below the reels is the UI where players can choose bets of up to 10 units of the currency they are using just before commencing play with the auto-spins button on the left or the huge play button on the opposite side.

The rules are pretty simple as well. Punters look to land the qualifying number of identical symbols adjacently to each other on any of the utilized paylines. Speaking of symbols, there are 9 of them, each possessing some handy powers we will get to in a minute.

Starting with the high-pays, players find a ring, an overflowing pot of gold, Ali Baba, and Morgiana, all of which require two to five-of-a-kind to trigger a payout. Low-pays, on the other hand, constitute card royals, A, K, Q, J, and 10, which require at least 3 to unlock the corresponding rewards.

When it comes to the math model powering the slot, it brags a combo of stats most likely to appeal to the hardcore wagerer. First is the default Return To Player Percentage, which just misses the average mark by 0.11%. Second and most important is a high volatility setting rated at 5/5 paired with an average hit-rate to dish out big wins after extended periods of low-win spins.

Every Win puts you in the Way of Dream Wins!

Ali Baba’s Luck doesn’t come with a substituting wild symbol, but what if offers in place of that is much more thrilling.

Whenever a symbol is involved in a winning combination, it is highlighted at the top of the grid, meaning that it can show up golden in the next spin. The advantage of this is that all golden symbols link up to form winning combinations regardless of their position as they clone themselves to occupy entire reels. That said, one of the best case scenarios would be to have Ali Baba’s symbol form a win, and then landing a 5-of-a-kind combo of his gold symbols on the next spin, resulting into a 5000X (500X on 10 Paylines) payout when the golden symbols clone themselves to occupy the entire grid.

Lucky Round for the Dream Spins.

Treasure Chest scatters can show up alongside the regular pays on any spin. At least 3 of them will gain you entry into Lucky Round, where you spin to land anywhere from seven to sixteen Dream Spins/Free Spins.

The advantage with all the rounds that are awarded on the house is that every symbol that forms a win will appear golden until the end of the session. This means that an expansion will be imminent whenever there is a win involving that symbol, giving you better chances of landing big wins.

Also important to mention, every additional treasure chest on the triggering round will add 4 dream spins to the free spins tally.

The most intriguing thing about Ali Baba’s Luck is the prospect of bagging more than 5000 times your bet on a single round. To put things into perspective, let’s assume that a random round unlocks wins on multiple paylines using Ali Baba’s and Morgiana’s symbols. That means that they can appear golden on the next spin, and if they do as 5-of-a-kind combos, 5000X (500X on 10 paylines) and 2000X (200X on 10 paylines) will be paid side by side after the symbols expand in turns to fill the entire grid.