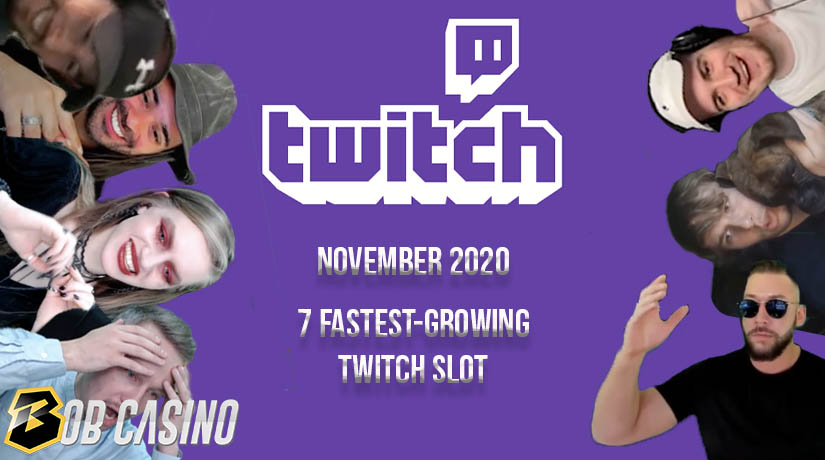 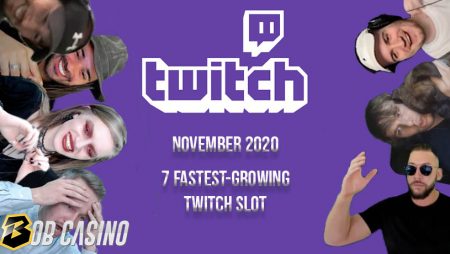 The competition is the gambling scene of Twitch is strong. New channels are rapidly becoming overnight success stories, pushing their competitors into back into obscurity.

In order to keep you abreast with the slot streaming industry’s goings-on, our slot streaming experts have compiled a list of the 7 fastest growing Twitch slot streamers in November 2020. Read the List below or check out the video version here:

Sparks did not fly immediately after the channels launch in October 2016. In fact, until about 2019, almost nobody knew of this streaming channel’s existence. Therefore, it is quite surprising that the French streamer has recorded a growth of an impressive 48 followers per hour this month.

The channel also averages about 4,183 concurrent viewers on its streams.

With over 60 hours streamed thus far and over 3.5 million total views, Bidule is one of the highest-ranked French Twitch slot streaming channels. Despite the sudden jolt in views this year, it is safe to say that Bidule has earned its well-deserved spot through steady, consistent growth.

Our recommended video on the Bidule channel is where he goes home with 313,900 Euros playing Mega Ball.

We strongly presume that this video, which was published in Aprtile 2020, has been one of the primary reasons behind Bidule’s rather abrupt rise to stardom.

As far as overnight successes are concerned, few Twitch slot streamers have risen as rapidly as TeemNovak. Registered in August 2020, this newbie channel has experienced rapid growth and is showing no signs of slowing down.

TeemNovak streams thrice-weekly. As at the time of writing this article, TeemNovak had amassed an impressive 7,765 followers this month alone. This stat becomes pretty remarkable when you consider that the streamer currently has only 17,000 followers to their name.

Little is known about the channel’s creator. He admits to quitting his job as a restaurant manager to make a career of Twitch casino streaming. From the looks of it, there is a bright future ahead for this relatively young streamer.

Check out this recent highlight to see what TeemNovak is all about:

TeemNovak went live on Twitch. Catch up on their Slots VOD now.

Over the years, the slot streaming scene has gathered a growing cult-like following. This growth has provided an opportunity for up and coming streamers like DeuceAce to rise to prominence. This young channel gained over 63,000 followers in just 9 months.

We have narrowed the streaming channel’s explosive growth to three key factors:

Another key reason behind DeuceAce’s swift success has been its viewer engagement. DeuceAce has been particularly remarkable in connecting to its highly engaging fanbase. They find him funny, smart, and downright lucky.

DeuceAce’s engagement with the Twitch casino viewers during live streams is essential to his success.

The latter is also the third driving factor behind DeuceAce’s ever-growing fanbase.

In one of the channel’s most-streamed videos, he wins over 129,000 Euros playing The Dog House slot. The streaming channel’s second most-watched video shows an even more impressive 150,000 Euro win in Money Train 2. You can watch it here:

Unlike a few others on this list, the Xposed streaming channel is not wholly dedicated to slots.

According to the stats, online slots are the third most-streamed game category on the channel behind Call of Duty Black Ops and Modern Warfare. Interestingly though, slot games have given the streamer most of his followers.

Xposed is run by a 24-year-old gamer, Cody, who has been an avid Twitch slot streamer since 2015.

Cody’s followership of over 248,000 is the product of consistency, hard work, and uncanny gaming dexterity.

The result of this effort is an impressive reputation in the gaming community. Xposed’s reputation in slot streaming has attracted high-profile followers, including superstars like Roshstein.

The Twitch slot streamer has played a total of 78 different game titles on his channel. A vast majority of these games are casino slots. Among his most viewed slots videos is one showing Cody winning almost $20,000 playing The Dog House slot. You can check it out here:

Unlike the vast majority of entries on this list, Submerzed’s growth has been slow and leisurely.

This online gaming streamer is eager to admit that he works as a teacher and is a brother to two other Twitch success stories, Xposed and Pulmonary.

Given Submerzed new account status, it is easy to ponder why Submerzed is occupying space on the list of fastest-growing channels. Now, here is why. The streamer grew by over 11,000 followers this month alone, which more than tripled its subscribed count.

Having similar traits as Xposed has proved to be beneficial for Submerzed.

Personality-wise, Submerzed shares a lot of his brother, Xposed’s traits.

Most notable is a propensity to extremes of emotions. Xposed seems to be learning the ropes while eagerly announcing its presence.

And, if the enormous growth experienced this month is anything to go by, then it is clear that the slot streaming world has begun to take note.

When GloomyJulius says her role is to make the darksome fun, she means it.

Since joining Twitch in July 2020, this slot streamer’s channel has blossomed fast. In just a couple of months, GloomyJulius has rapidly gained a following of 25,000. In November 2020 alone, GloomyJulius amassed an astounding 13,637 followers.

A glance at her channel will tell you one thing for sure. GloomyJulius knows what she is doing and her channel has a clear direction. Her channel shares information on everything you need to know about slots. Her page provides viewers with gambling awareness tips and personalized casino gaming insights.  Viewers should expect posts 2 to 3 times weekly.

She is occasionally indifferent to her slot games’ progress. Instead, she spends time engaging viewers on diverse issues, including politics and relationships.

Could this be her secret to success?

Our number one pick is no surprise to anyone. Roshtein’s geometric growth does not show any signs of hitting a spurt anytime soon.

For as long as we have kept tabs on this channel, they are among the fastest-growing Twitch slot streamers of the month.

This November, Roshtein amassed an incredible 21, 054 followers, which puts his total to 409,284. Roshtein’s slots streams are the most viewed on the platform, averaging an incredible 10,882 views per stream.

Created in October 2014, the streaming channel turned 6 this year. This does not undermine Roshtein’s overwhelming influence over the Twitch slot streaming universe.

Besides the video in which he sets a new Jammin Jars world record, there are other equally impressive clips in Roshtein’s portfolio. His most popular video, accumulating 67,477 views on Twitch thus far, shows him winning 144,550 Euro playing the Money Train slot.

His total 25,913,471 views on Roshtein’s videos prove that he is winning not just in slots but in streaming his victories.

Christmas Carol Megaways™ Slot Review (Pragmatic Play)
9 hours ago
Recent Comments
Categories
Recent Posts
18+
Gambling News from NewsCasinoNew.com is made for the most passionate fans of online casinos and internet gambling. We cover everything: from popular gambling world events and trends to new casino slot game releases and reviews, you will find the latest news stories.